Exclusive: Texas, USC and Michigan to pursue John Harbaugh as next coach 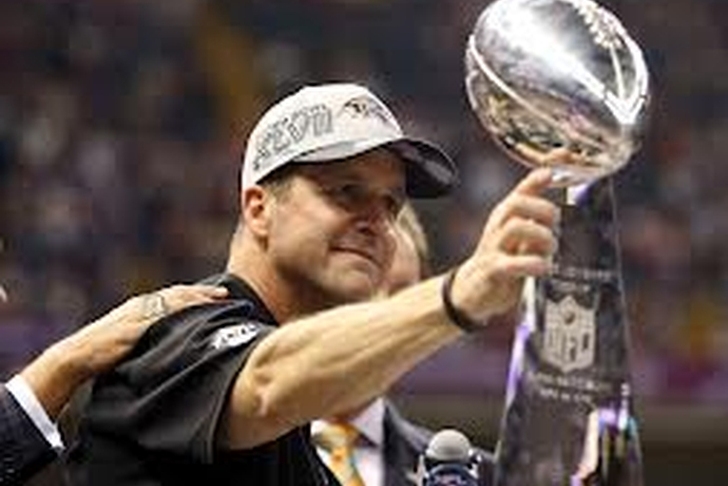 In an exclusive series of conversations and emails with three independent sources close to the situation, we've learned that John Harbaugh is set to be the hottest commodity in the history of college football coaching. Three historical powerhouse programs potentially will be going all out to land the Super Bowl champion coach: Texas, USC and Michigan.

Each source was able to reveal this breaking information exclusively under the condition of anonymity.

"John is ready to move on from the Ravens and lead a college program for the rest of his career, if the right job presents itself," source #1 told us.

"The NFL is a grinding gig and he has proven that he's arguably the best coach in the league right now. But, many of his core pieces that have been with him for six or seven years have left the team, and he looks at the college game and looks at the glory and dominance that a coach like Saban or Urban are getting and gets a tad envious." the source added.

The Trojans are the only program of the three that are looking for a coach right now, and they can be much more aggressive in their pursuit of Harbaugh, albeit behind closed doors. Current interim coach Ed Orgeron is seen as the ultimate 'safety candidate' for the Trojans right now, who plan

to swing for the fences with Harbaugh. The school has reached out to Harbaugh's representatives, who apparently have indicated that the coach is interested, but no formal conversations could take place until after the Ravens season, which will likely end Dec. 29th against the Bengals.

Not having a coach could end up hurting USC in their pursuit of Harbaugh. There will tremendous pressure on USC AD Pat Haden to take action immediately after the Trojans' final regular-season game in early December. Given Harbaugh's inability to enter discussions until later that month, Haden could end up pressured into making a move before Harbaugh becomes available.

The Trojans are preparing to approach Harbaugh through third-party channels in the next few weeks and make a private offer of 5 years, $40M for John to leave the Ravens the Monday after the NFL season finale. If Harbaugh is unwilling to come to terms in secret, (with hope that the news doesn't leak for a month) USC would potentially have to pass on their dream coach and focus efforts on Kevin Sumlin or another college head coach.

The chances that Mack Brown is retained as head coach next season are less than 10%, based on what we've been told while researching this story.

The Longhorns have much more flexibility here than the Trojans. Texas will likely play in a bowl game towards the end of December/early January, which gives Mack Brown the chance to 'retire' after the bowl game. This would give Texas the chance to put the full court

press on Harbaugh, and offer him the job without having to put him in an uncomfortable situation with the Ravens. This would also avoid the media circus that would ensue if news broke of conversations between Harbaugh and any school before the NFL season is over.

One thing is clear when it comes to Texas -Harbaugh knows it's the one school that can provide him with the high school talent base and resources to compete with Alabama in the first two years of his tenure.

"Let's be honest here, Texas would be a machine with John running things. He has all the great traits of his brother, without all of Jim's macho, egotistical BS that a school like Texas may not want to deal with. If you think about it, this is a no-brainer for both Harbaugh and for Texas. He's young enough to coach there for 15 seasons, and he's dynamic enough to compete against Sumlin and SEC schools in recruiting the best players in Texas and nationally." said source #2.

The Wolverines are without question the wild card here. This is the one school that John Harbaugh would 100% take a job with if it was offered, even though he would have some reservations about taking over for his friend Brady Hoke.

Hoke bought some job security with a win last weekend, and is seen to be much more likely to keep his job after this season than either Mack Brown or Ed Orgeron.

"Brady better win this week (vs. Iowa) and not get blown out against OSU, or he may be coaching for his job in the bowl game." said a source very close to the Michigan program.

The source expanded on the Harbaugh-to-Michigan speculation:

"John is a Michigan fan, plain and simple. It is the only school he follows and he loves the Wolverines, having grown up on campus and around the program as a kid when his dad coached there. He really wanted to play at Michigan and was always a little envious that his

brother got to play for Bo (Schembechler)," source #3 added.

"Taking on Urban Meyer head to head every year for a decade is a challenge that a high-level coach like John would thrive on. John could quickly be as big of a name in college as Nick Saban or Meyer, and it's a scenario where he could coach at a high level until he's ready to retire."

Harbaugh went to Pioneer High School in Ann Arbor, MI, and met his wife when he was an assistant coach at Western Michigan. John's sister Joanie is married to Indiana basketball coach Tom Crean, who is from Michigan, and most of his family still resides in the state.

"It would be a family reunion for the Harbaughs if John ended up in Michigan. Joanie's in-laws are all in state, and John's wife is from there and has family there. And, frankly, Ann Arbor is still home for him." source #3 added

During their last coaching search in 2011, Michigan offered the coaching job to John Harbaugh, who turned it down, citing his desire to win a Super Bowl.

We'll know much more about where each school stands in two weeks. All three schools have HUGE season finales, each of which could decide the fate of their coaches:

If any of the schools pulls off the upset, that coach will likely be retained for 2014. Lose - or worse, get embarrassed - and the race for Harbaugh becomes very real for that school, and it could result in one of the great coaching hire storylines in the history of sports.

10 Ways You Know You Went to Texas

The 11 Ways You Know You Went To USC