5 Things We Know About Texas Through 8 Games 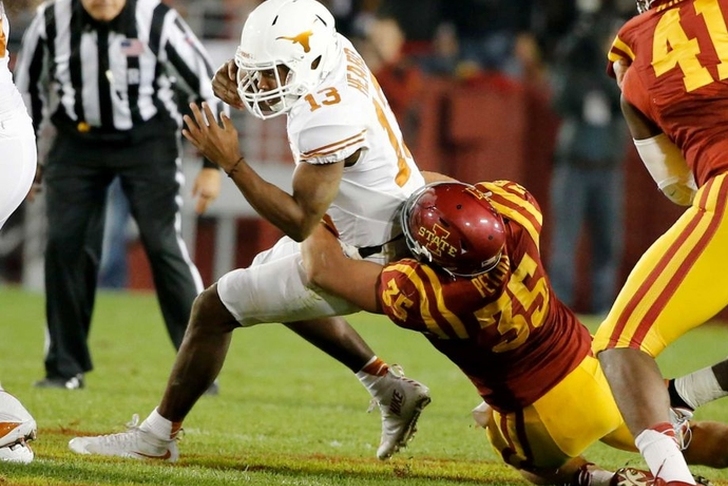 The Texas Longhorns appeared to be on the upswing after an upset win over Oklahoma and a win over Kansas State. Instead, all of that hope has been drained after a disastrous effort from the Longhorns in a 24-0 loss to Iowa State. Texas is now 3-5, with four games left on their schedule. Here are five things you need to know about Texas through eight games.

Texas has leaned heavily on freshmen this season, which is part of Strong's grand rebuilding plan. None of the freshmen have been more impressive than MLB Malik Jefferson, which shouldn't be a surprise. He was a highly touted recruit and he's lived up to much of the hype this season. Strong is starting two true freshmen on the offensive line in Connor Williams and Patrick Vahe. CB Holton Hill looks like the next great Texas defensive back. Those are only a few of the true freshmen seeing playing time this season. While all of them still have plenty of growing to do, they at least give Texas some hope.

2. Jerrod Heard Still Has A Lot Of Improving To Do

Heard was simply awful against Iowa State. He had nothing going on either the ground or in the air. After playing well at times this season, Heard looked like the QB Texas has searched for. However, he's only eclipsed 120 yards through the air just once this season. He's been great on the ground, but the offense struggles badly when Heard can't use his feet. He must improve as a passer if he's going to get Texas back to its winning ways. There is a chance the team will turn back to Tyrone Swoopes after Heard's poor game.

3. Biggest Win Was Over Oklahoma

Let's start with a positive. Texas' upset over Oklahoma is easily the biggest win in Strong's time at Texas. It was the type of win that could turn around a team and get them on the right path. It was a staple win for Strong. Unfortunately, it didn't last.

4. Strong Is Back On The Hot Seat

A 24-0 loss to Iowa State is easily the worst loss of Charlie Strong's tenure with the Longhorns. Texas isn't supposed to EVER lose to Iowa State, even if it is a rebuilding year for the Longhorns. Plus, this is an Iowa State that likely won't even make a bowl game. Getting shutout makes the game only more embarrassing. The loss has placed Strong right back on the hot seat.

I don't see any scenario in which Texas beats Baylor, which means the Longhorns will have to win out to make a bowl. The Longhorns have games against West Virginia, Kansas and Texas Tech left. Kansas should be an easy win. That leaves WVU and Texas Tech, both games that Texas can win. However, they'll be difficult games and it wouldn't be surprising if Texas was the underdog in both. Missing a bowl game is not okay at Texas and not part of Strong's rebuilding plan.