5 Things We Learned From Texas' 23-0 Victory Over Kansas 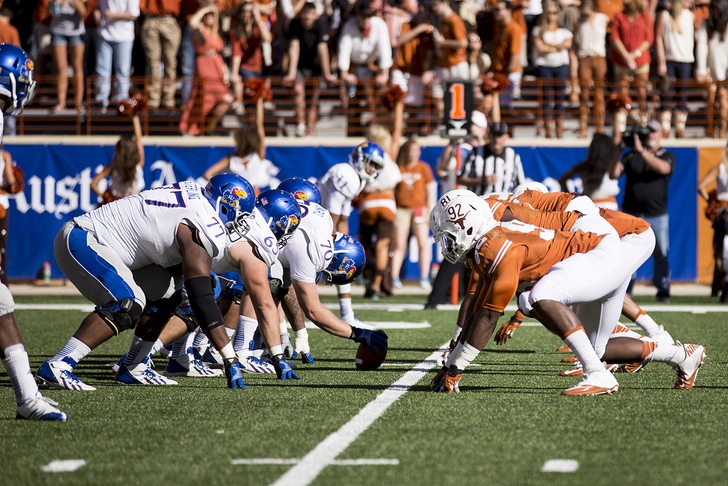 Charlie Strong's defense won the first half for the Texas Longhorns, forcing three Montell Cozart interceptions to stake Texas to a 13-0 lead over the Kansas Jayhawks.

Kansas' offense would never get going in the second half, and Texas would take advantage on their way to a 23-o victory in Lawrence.

Here's 5 things we learned in this Big 12 opener for both teams...

5. Tyrone Swoopes Has The Big Play In Him

Texas (2-2) could have very well been up 20 or 27-0 at the end of the first half, had QB Tyrone Swoopes  (19-of-34, 218 yards, 2 TD) taken a little off on a couple of missed throws. As it was, Swoopes still showed what his athleticism can do for the Longhorns - especially on his impressive seven-yard TD scramble in the second quarter and a pinpoint TD pass to John Harris late that made it 23-0.

He will have to tighten things up for the Longhorns to contend, but he has the tools to do so with work.

In fact, the whole Texas secondary should get one each after forcing four interceptions by Kansas QB Montell Cozart (12-of-31, 140 yards).

However, it was junior CB Duke Thomas' day to showcase his talents in front of a hostile crowd in Lawrence. Thomas followed two interceptions in the first half with a critical pass defensed on a 4th-and-goal for Kansas late in the 3rd quarter. That would preserve a 13-0 lead for Texas and would pretty much start the Longhorns' ball rolling towards victory.

3. Charlie Weis Has Kansas' Defense Going In The Right Direction

The Jayhawks' nine returning defensive starters from the 2013 squad kept Kansas (2-2) in the game for the majority of the day thanks to impressive work both in the front seven and in the secondary. The offense in Lawrence is a mess right now, but the Jayhawks will be able to stay in plenty of games in 2014 if they continue to frustrate opposing offenses with aggression in the pass rush and solid assignment discipline.

2. Texas' Defense Was Just That Much Better

It wasn't just the secondary that led the Longhorns to victory - it was a complete effort for Charlie Strong's entire defensive arsenal. A good defense can hold top offenses in check while never letting average-to-substandard offenses find their way out of the blocks. Aside from a couple of hiccups, Texas stifled Kansas' offense all day long to show just how much quality this defense can produce on a weekly basis.

One win does not make a championship, but remember the story of the 2013 Longhorns. That team also started 1-2 before advancing all the way to the conference title game against the Baylor Bears. This retooled Longhorns squad has a long way to go to match or exceed that level of success, but a 1-0 conference record and a level overall record is a good place to start.