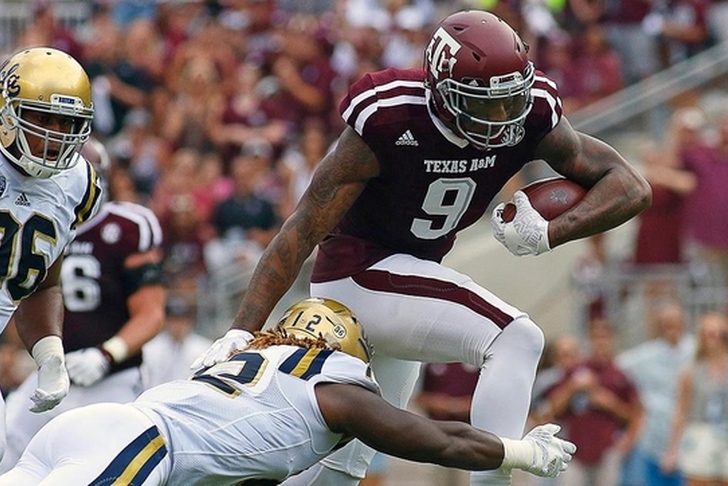 The Texas A&M Aggies might have been unranked, but they were the betting favorite against the No. 16 UCLA Bruins. It turns out Vegas knew what they were doing, as the Aggies upset the Bruins in thrilling fashion, SCORE.

The Bruins were down 24-9 with less than five minutes to go in the fourth quarter, but scored to make it 24-16. They managed to make force a 3-and-out and got the ball back with about 3:30 to play. The Bruins scored on a long TD pass and converted the two-point conversion to tie it up. Josh Rosen was picked off trying to lead another scoring drive in the final minute and the teams went to overtime.

A&M got the ball to start OT, and drove down the field to the one-yard line. But UCLA's defense held and for three straight plays. But on 4th and 1, Trevor Knight managed to sneak in for the TD. The Bruins faced 4th and goal from the 5 on their possession and came up short, giving A&M the win.

UCLA QB Josh Rosen, who said earlier this he didn't think Kyle Field would provide much of a home field advantage, had his ups and downs. He completed 26 of 44 passes for 343 yards, 1 TD and three picks. He was sacked five times and the crowd chanted "50,000" near the end of the game. He picked up his play late, but the Aggies held on.

The UCLA rushing attack had little success, putting up just over three yards a carry.

A pair of transfer from Oklahoma led the way for Texas A&M. RB Keith Ford had 14 carries for 65 yards and a TD. QB Trevor Knight, a graduate transfer, was 22 of 42 for 239 yards, a TD and a pick. He also added 31 yards and two TDs on the ground.

UCLA took a 6-0 lead to start the game, but the Aggies responded to lead 24-9 late in the fourth quarter. It ended up as a thriller, which was a bit of a surprise since it looked like the Aggies would finish with an easy win.