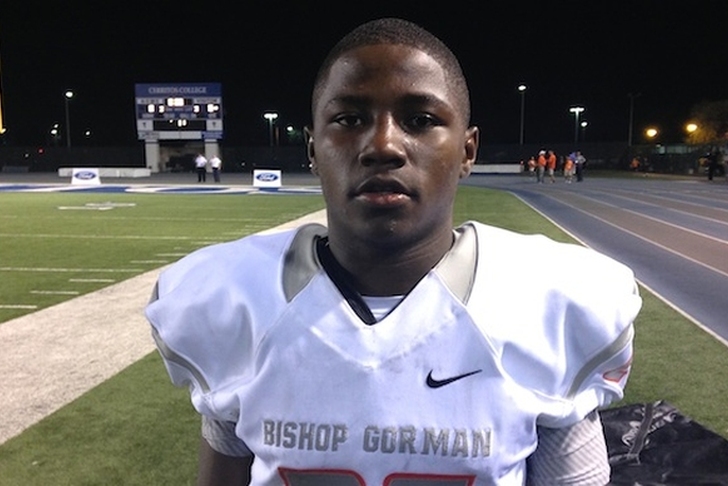 The Texas A&M Aggies offered 2017 five-star wideout Tyjon Lindsey (Las Vegas, NV), which Lindsey said "excited him." He and QB Tate Martell, his high school teammate and fellow five-star recruit, want to go to the same school, and the Aggies are the only program that has offered both players.

“I didn’t see it coming at all actually,” Lindsey said, via 247sports. “I know Tate (Martell) has been talking to them for a while now, so I’ve heard a lot about A&M, but I haven’t personally been in contact with any of them. It was out of the blue. My coaches called me into their office and put me on the phone with Coach [Aaron] Moorehead and that was it. I was really excited. He told me that he’d love to get me down there and how well I’d fit in there. He thinks I could be a big-time playmaker in their offense. He wasn’t just throwing an offer out there because of Tate, either. He wanted to make sure I knew that he wanted me there.”

Lindsey hasn't visited College Station yet, but now plans to take several trips to Texas over the next few years.

“Now that I have an offer I should be going out there with Tate a lot,” he said. “I know Tate has plans to get out to a few games this year so I’ll probably be with him.” Lindsey comments on the possibility of playing with Martell at the next level. The dream is still high for both of us but it hasn’t been as talked about as much because Tate has great schools that have offered him such as Michigan and Alabama. I don’t have the same opportunities he does right now. Wherever we go, we’re both going to support each other no matter what. Most schools are seeing how we would be great together and that we’d do very well playing together wherever we ended up. It’s a great feeling that college gives us both opportunities that we can capitalize on.”

Martell is set to make his commitment on August 20, but Lindsey says he'll take his time.

“I’m going to take it slow because things are different with receivers compared to quarterbacks,” he said. “Quarterbacks have to commit early because their spot could be taken by other quarterbacks so he’s making that sooner than me. I’m trying to help my team compete for a national title so I’m not trying to get caught up in all this recruiting.”

USC, Oregon, Washington, and Florida State are the other teams that Lindsey is very interested in.