South Carolina vs. Texas A&M: 3 Things We Learned From Each Team 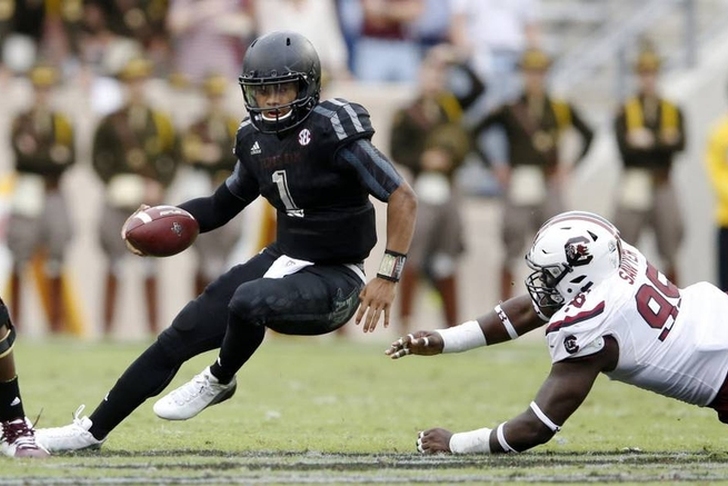 The Texas A&M Aggies snapped a two-game losing streak with a 35-28 win over the South Carolina Gamecocks, keeping them afloat in the crowded SEC West race. Here are three things we learned from both teams in the game:

Kyler Murray is the real deal. The heralded true freshman quarterback got his first career start in this one and didn't disappoint, completing 20/28 passes for 223 yards and a touchdown while rushing for 156 yards and another score.

There doesn't appear to be a quarterback battle brewing. Murray got the start with Kyle Allen, who had started all season prior to today, was third on the depth chart. Many speculate that Allen is suffering from a shoulder injury, but either way, it's clear that Murray is the man for the foreseeable future.

Texas A&M's defense still has a long way to go. The Aggies have made major strides on that side of the ball under new defensive coordinator John Chavis, but they were routinely gashed on the ground by a South Carolina offense that's one of the least explosive in the country - not good news for TAMU going forward as they face better competition.

It's time to lean more on the run game. Wideout Pharoh Cooper is the Gamecocks' best player, but they can't force feed him the ball with how inconsistent the passing game is. Running backs Brandon Wilds and David Johnson combined for over 150 yards and two touchdowns in this one, showing it's time to give them the ball more.

There is no answer to this quarterback situation. South Carolina has had three starting quarterbacks this year, and while Perry Orth has looked better than Connor Mitch and Lorenzo Nunez, he had another subpar outing, throwing for 192 yards and two interceptions.

Who is this team's second receiver? Outside of Cooper, no one on this receiving core has stepped up. Cooper caught four passes in this one, and the rest of the wide receivers combined for three. The Gamecocks NEED to get some more talent on the outside if they're going to turn the program around.