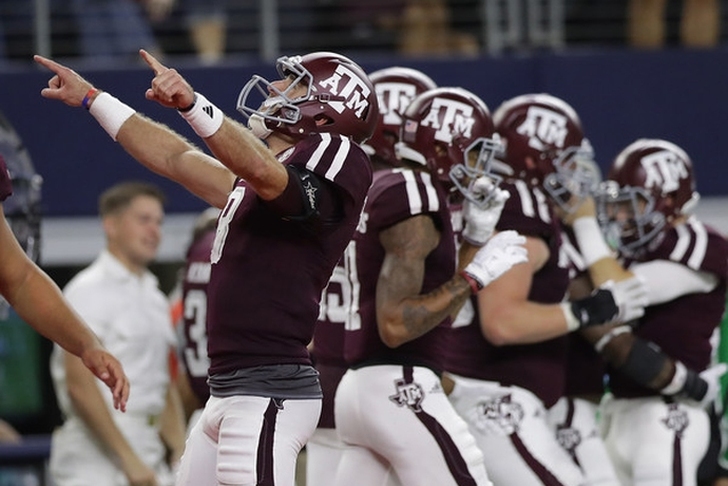 The only matchup of the weekend between two top-10 teams did not disappoint, as the Texas A&M Aggies held off another furious rally from the Tennessee Volunteers to win, 45-38, in double overtime..

Texas A&M jumped out to a huge early lead in this one, using several short touchdowns - and three Tennessee fumbles - to build a 28-7 lead. But, as we've seen so many times with this Tennessee team, they found a way to climb back into it.

Touchdown runs from Alvin Kamara and John Kelly cut the deficit to a single possession, only for Aggies quarterback Trevor Knight to reel off a massive 62-yard touchdown run that appeared to ice the game for Texas A&M.

.@Aggiefootball QB Trevor Knight finds the hole and picks up a much needed insurance TD. https://t.co/kn9nM6e9UW

From there, the Vols quickly found a way to march down the field again, with Kamara scoring on a 4-yard TD run with two minutes left. With the score now 35-28, Texas A&M was trying to run the clock out to finish the game. Then this happened:

YOU'VE GOT TO BE KIDDING!!!!
TENNESSEE TAKES OVER ON THE TOUCHBACK. https://t.co/WvQX4T347x

Tennessee got the ball after the touchback, promptly driving all the way back down the field to score with just 41 seconds left, tying the game 35-35. We seemed destined for overtime - until Texas A&M went all the way down the field and got into field goal range and a chance to win the game in the final seconds.

Except, as in typical Tennessee magic fashion, the Aggies missed the kick, causing the game to go into overtime.

After the two sides traded field goals in the first overtime, Knight rumbled in for the 1-yard TD run:

What an effort by Trevor Knight. @AggieFootball is back on top. https://t.co/agurnSq44K

Needing to answer, Tennessee quarterback Josh Dobbs through an interception to seal the victory for Texas A&M.

Knight finished the game with 239 yards passing, two touchdowns and two interceptions with another 110 yards and three touchdowns on the ground.