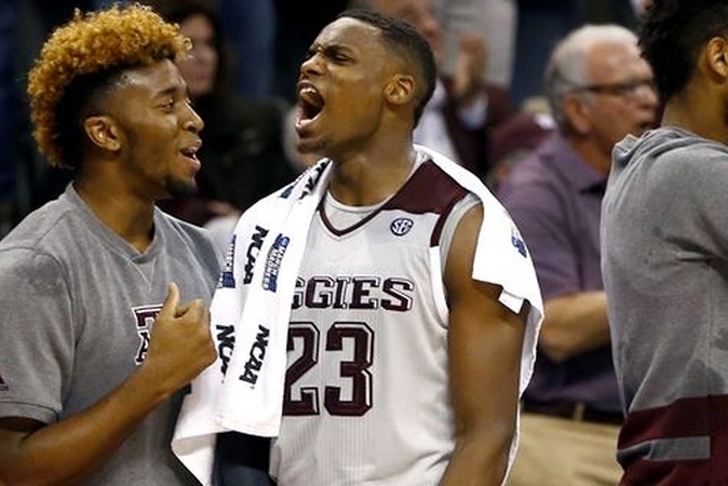 The Northern Iowa Panthers had this game won - then the Texas A&M Aggies pulled off the most dramatic comeback in NCAA Tournament history.

UNI got control of the contest with a 14-3 run to close the first half, giving them a 32-22 lead at the break. That lead grew to as many as 15 points early in the second half for the Panthers, but the cold-shooting Aggies eventually get hot.

Texas A&M was able to cut the deficit to six with 4:33 left, and after Northern Iowa pushed the lead back up to double digits, the game looked like it was over.

It was most definitely not.

The Aggies went on a stunning 14-2 run over the last 31 seconds of the game to force overtime after four turnovers by the Panthers, all of which led to easy layups by Texas A&M.

This is how you erase a 12-point deficit in 35 seconds. https://t.co/l3eJ83wDDB #MarchMadness

Texas A&M continued their run in the extra session with an old-fashioned three-point play from star Danuel House, who finished the game with 22 points - all of which came in the last 5:45 of regulation and in overtime. However, the Panthers quickly regained momentum with a pair of three-pointers from Jeremy Morgan and Paul Jesperson.

A few moments later, House hit another three-pointer with less than a minute to tie the game 79-79, but UNI's Wyatt Lohaus came right back with a three-pointer of his own to give them the lead back. Yet, as became tradition in this game, the Aggies found a way back into it as Alex Caruso's layup with 5.9 seconds left sent the game into a second overtime.

A&M was able to grab a 88-86 lead after several free throws from both sides, then House hit a long jumper to push the lead to four. The Aggies then sealed the win with a few free throws down the stretch.

Morgan had a huge game to lead Northern Iowa's offense, scoring a game-high 36 points to go along with 12 rebounds. Leading scorer Wes Washpun had an off shooting night (2/11, nine points), though he did contribute an important 10 assists. Klint Carlson also came off the bench to provide a surprising 17 points.

Caruso stepped up for A&M throughout the entire game, leading the Aggies with 25 points and six rebounds.

Texas A&M advances to the Sweet 16 where they will face Oklahoma in Anaheim, CA, on Thursday.