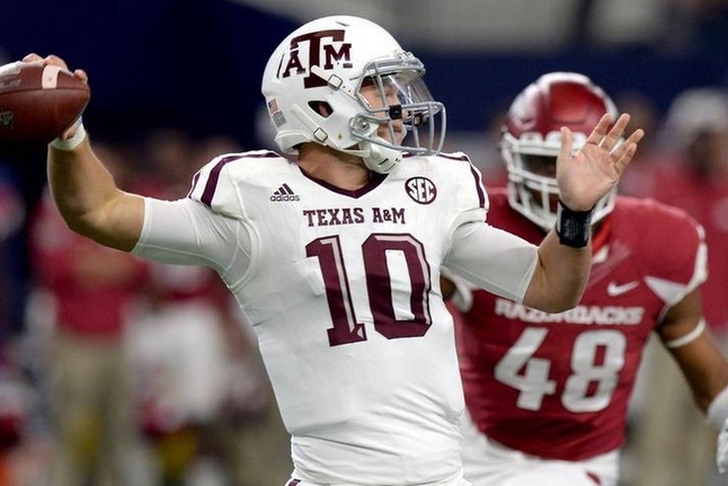 Texas A&M Aggies quarterback Kyle Allen announced that he will be transferring from the school on Twitter after starting 14 games for them over the course of the past two years before losing his job to freshman Kyler Murray. He is the second Texas A&M quarterback to transfer in two years after Kenny Hill transferred to TCU last year. Here are the three schools that Allen, the No. 35 overall prospect in the class of 2014, is most likely to end up with:

Cal is currently thought to be the favorite to land Allen, who is from Scottsdale, Arizona. He'll have two years of eligibility remaining in 2017 and 2018, which coincides with when the Bears will have questions at the quarterback position. Starter Jared Goff will be a senior in 2016, but he is expected to enter the NFL Draft. No matter who would take Goff's place next season, Allen would enter the 2017 season as the favorite to win the starting job.

Oklahoma also seems to be a likely destination as Allen said they fit his ideal criteria - a Power 5 school who will have a senior QB in 2016 and an open job in 2017.

"Oklahoma comes to mind because it does fit all those things, and my old (high school) teammate (Mark Andrews) is a receiver there, and coach (Bob) Stoops is an all-time great coach," Allen said. Current Sooners quarterback Baker Mayfield is a junior and transferred from Texas Tech before winning the starting job prior to this season.

Allen nearly signed with Notre Dame coming out of high school, and while he would need to compete for the starting job in 2017, it certainly wouldn't be a surprise to see him give the Irish another hard look this time around. Cal and Oklahoma are clearly the two frontrunners, but head coach Brian Kelly will make a serious push to land him.