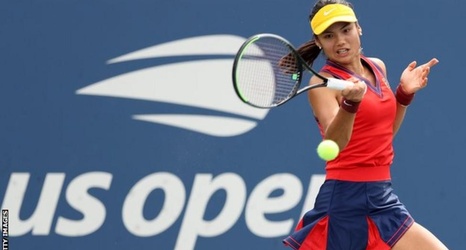 British teenager Emma Raducanu showed her talent and maturity again on the Grand Slam stage as she eased to victory on her US Open main-draw debut.

Raducanu, 18, was a break down in each set but won 6-2 6-3 against experienced Swiss opponent Stefanie Vogele.

After her stunning run as a wildcard at Wimbledon, Raducanu qualified for her first major in New York.

A composed display put the world number 150 through to a second-round match with China's Zhang Shuai.

Raducanu is the first British player to win a match in the women's singles at Flushing Meadows this year, although Katie Boulter has the chance to join her in the next stage later on Tuesday.