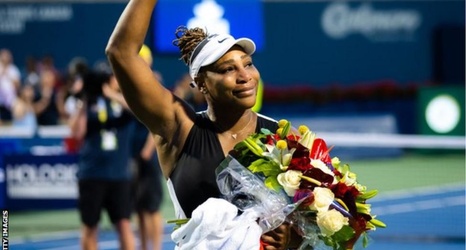 An emotional Serena Williams has admitted she is "terrible at goodbyes" following defeat by Belinda Bencic in the second round of the Canadian Open.

The American, 40, received a standing ovation on court and had the full backing of the crowd throughout.

"It was a lot of emotions obviously," said Williams.

"I love playing here, I've always loved playing here. I wish I could have played better but Belinda played so well today. It's been an interesting 24 hours.

"As I said in the article, I'm terrible at goodbyes. But, goodbye Toronto."

Writing for Vogue on Tuesday, Williams said she was moving towards "other things that are important to me", adding she did not like the word "retirement".