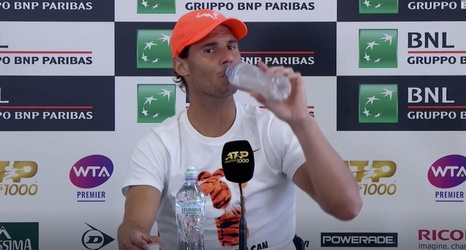 Rafael Nadal paid tribute to fellow Nike athlete Tiger Woods during his press conference on Friday after he reached the Italian Open semifinals with 6–4, 6–0 victory over Fernando Verdasco in Rome.

The 17-time Grand Slam winner discussed his victory while sporting a white shirt with a tiger on the front and the tagline 'If Anyone Can.'

Woods, a 15-time major champion, won the Masters last month in Augusta for his 81st PGA Tour victory. Nadal holds 80 ATP Tour titles. If Nadal makes it to the finals on Sunday and can record a victory, he'll join Woods with 81 career trophies.