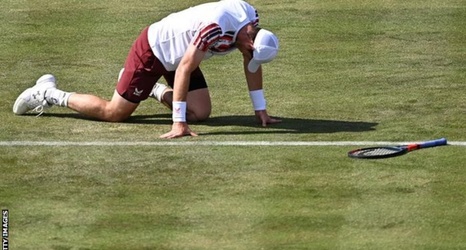 Andy Murray made an emotional and winning return in his first singles match on grass for three years as he reached the second round at Queen's.

The Briton, 34, beat Frenchman Benoit Paire 6-3 6-2 in his first singles match since March after a groin injury.

Last year's grass season was cancelled because of the coronavirus pandemic and he played doubles the previous year while on the comeback from hip surgery.

"Sorry," he continued, shaking his head as he tried to contain his emotions while the crowd cheered.