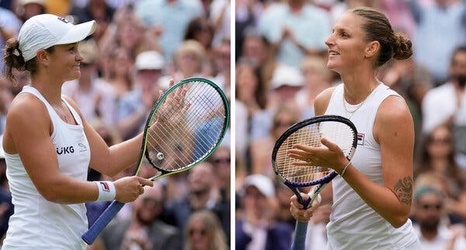 WIMBLEDON, England — Those at Centre Court got two very different tennis matches for their money on Thursday.

The first women’s semifinal, between Ashleigh Barty and Angelique Kerber, was a craft fair, full of slice and guile and often lengthy rallies. The second semifinal, between Aryna Sabalenka and Karolina Pliskova, was heavy metal: thunderous serves, big-bang returns and Sabalenka’s shrieks.

But the goal was the same for all involved, and when the last backhand was chipped and the last forehand smashed, the Wimbledon finalists were the current No. 1, Barty, and a former No. 1, Pliskova.