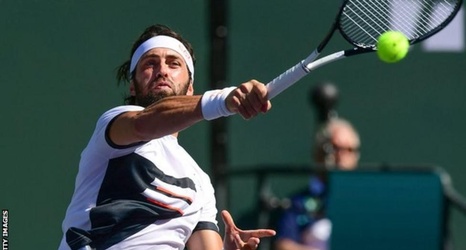 Stefanos Tsitsipas has been knocked out of the Indian Wells Masters after falling to a quarter-final defeat by unseeded Georgian Nikoloz Basilashvili.

Basilashvili capitalised on the out-of-sorts Greek world number three to win 6-4 2-6 6-4 in California.

The big-hitting 29-year-old had not won a main draw match at the tournament before this week.

Basilashvili will now face either Alexander Zverev or Taylor Fritz for a place in the final.

It is the first time world number 36 Basilashvili has reached the semi-finals of a Masters tournament.