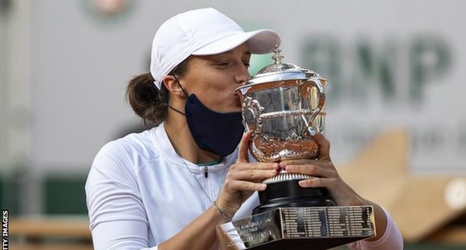 Just a week ago Iga Swiatek was unsure whether she would commit to tennis long term or go to university.

Now the 19-year-old is a Grand Slam champion - the lowest-ranked woman to ever win the French Open.

"I wasn't expecting to win this trophy," the Pole said after her dominant 6-4 6-1 win over American fourth seed Sofia Kenin in Saturday's final.

"It's obviously amazing for me. It's a life-changing experience.

"I just feel like I kind of made history."

Swiatek, who did not drop a set in the tournament, is the first player from Poland to win a Grand Slam singles title and the youngest French Open women's champion since Monica Seles in 1992.