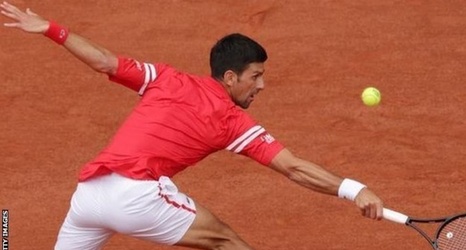 Top seed Novak Djokovic's quest for a second career Grand Slam continued with another one-sided victory as he reached the French Open last 16.

Djokovic, 34, has not dropped a set so far this week after seeing off Lithuania's Ricardas Berankis 6-1 6-4 6-1 on Court Philippe Chatrier.

The 2016 champion, aiming for a 19th Grand Slam, took six of nine break points and did not face one himself.

Djokovic's next opponent will be rising Italian teenager Lorenzo Musetti.

The Serb has played imperiously and intensely in his opening three matches, looking in prime condition after warming up for Roland Garros by winning a clay-court title in his hometown of Belgrade last week.