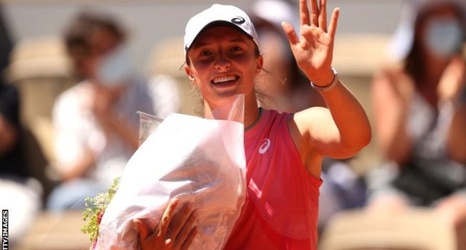 Defending champion Iga Swiatek celebrated her 20th birthday with victory over Slovenia's Kaja Juvan in the French Open first round.

"She didn't give me any birthday gifts so I'm really happy I could win those important points," Swiatek said in her on-court interview.

Swiatek, on a seven-match unbeaten run since winning in Rome, will face Sweden's Rebecca Peterson next.

There was, however, disappointment for Dutch 16th seed Kiki Bertens, who lost 6-1 3-6 6-4 to Slovenia's Polona Hercog.