French Open 2020: 'Sick' Alexander Zverev says he should not have played 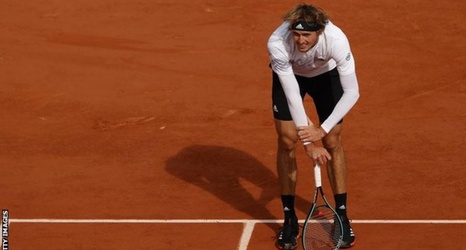 A "sick" Alexander Zverev said he "should not have played" after he lost in the French Open fourth round to Italian teenager Jannik Sinner.

The 23-year-old was up to date with his tournament-organised Covid-19 tests, with his last one on 29 September.

But a French Tennis Federation (FFT) statement said: "He did not consult the tournament doctors before his match."

Zverev told reporters he had a temperature of 38 Celsius during the night after his previous match against Marco Cecchinato on Friday.