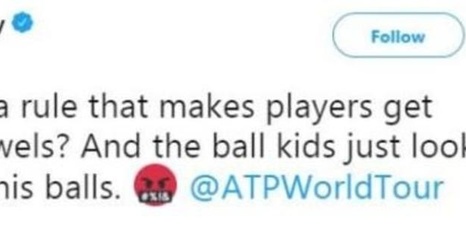 A Wimbledon chief has called for greater "mutual respect" after a video clip showed Fernando Verdasco gesturing at a ball boy to hurry up with a towel during last month's Shenzhen Open.

Mick Desmond, commercial and media director of the All England Club, added he was "not afraid" to fine players.

"There's an etiquette. The ball boys and ball girls of Wimbledon are all volunteers," Desmond told BBC Sport.

But he suggested an idea to introduce towel rails was unlikely to be adopted.

British tennis coach Judy Murray suggested a rule change after the footage of the world number 28 emerged in September, showing him motioning for the ball boy to get his towel to him more quickly between points.