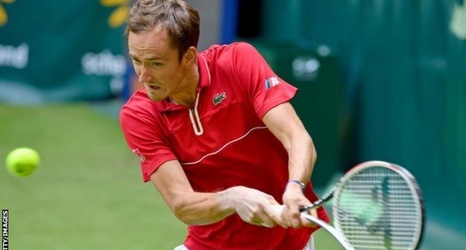 World number two Daniil Medvedev made a losing start to his grass-court campaign, losing 7-6 (8-6) 6-3 to Germany's Jan-Lennard Struff in Halle.

The Russian, who made the French Open last eight last week, led 5-2 in the first, but could not convert set point.

The second set was beyond rescue once Struff had taken two early breaks for a 5-1 lead.

Medvedev is the highest ranked player world number 45 Struff has beaten in his career.

The 31-year-old German has been in decent form of his own on the clay, reaching his first Tour final in Munich before making the last 16 at Roland Garros.