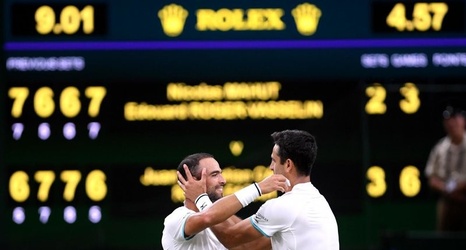 Juan-Sebastian Cabal and Robert Farah became the first Colombians to win a Grand Slam men's doubles title, beating France's Nicolas Mahut and Edouard Roger-Vasselin 6-7 (5), 7-6 (5), 7-6 (6), 6-7 (5), 6-3 in a Wimbledon final that lasted just under 5 hours and concluded under the Centre Court roof.

The retractable cover was closed after the fourth set, which finished at about 8 p.m. after the teams had been playing for more than 4 hours.

The match went on so long that the women's doubles final that was supposed to follow in the tournament's main stadium was postponed until Sunday.