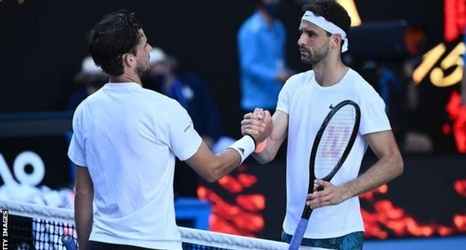 "Throughout every season you have one of those matches, you just keep the ball rolling, and today was one of those," said 18th seed Dimitrov.

He will face qualifier Aslan Karatsev, who stunned Felix Auger-Aliassime.

Thiem came through a gruelling five-setter against Nick Kyrgios to reach this stage, fighting back from two sets down, but there was no such reprieve against Dimitrov on Sunday.

The US Open champion looked to have taken the momentum with a break in the opening set, but Dimitrov immediately broke back and won four successive games on his way to taking the first set.