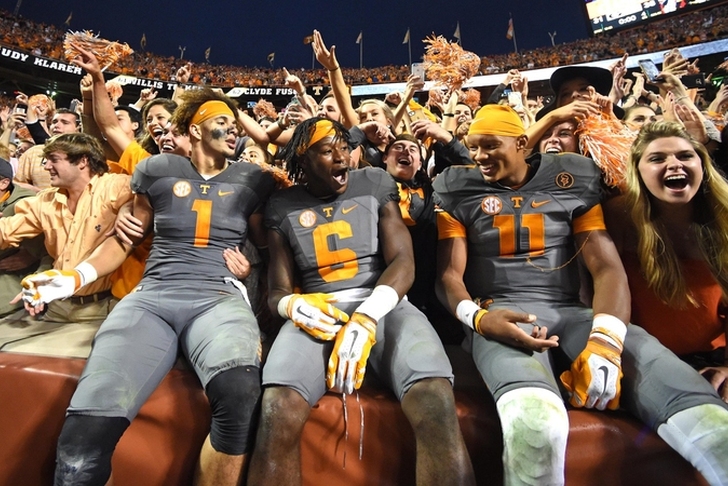 The Tennessee Volunteers were popular pick to win the SEC East last season, but came up just short. The Vols went 9-4, with those four losses coming by a combined 17 points. The Vols' expectations are just has high as we approach the start of the 2016 season, and they're more than capable of reaching and surpassing their goals. Here are three reasons why Tennessee will win the entire SEC this season:

3) Favorable Schedule
Favorable is a relative word in the SEC, but the 2016 schedule sets up pretty well for the Vols. They get Florida and Alabama earlier in the season and at home. That's a big help, especially since those schools have QB questions (see below). They have to travel to Georgia, but that might be their only really challenging road game. The Vols avoid LSU, Ole Miss and Auburn, giving them a great chance rack up wins against the lackluster SEC East.

2) Strong QB Play
Quarterback is going to be a major question in the SEC this. Who does Florida, Georgia and Alabama start? Outside of Ole Miss' Chad Kelly, the best QB in the SEC next year is Joshua Dobbs - and you could definitely argue that Dobbs is better than Kelly.

The dual-threat had a great junior year and should be even better next season. Dobbs completed 59.6 percent of his passes for 2,291 yards, 15 TDs and five picks. He was just as deadly on the ground, racking up 671 yards and 11 scores. With one of the top QBs in the conference, the Vols will be in position to win the SEC.

1) Young Talent Everywhere
Butch Jones has done a great job recruiting at Tennessee and it's going to pay off this year. The Vols return 18 starters, showing just how loaded they are going to be loaded on both sides of the ball. Few schools in the country return that much talent, and they have only improved. This season is the year where the Vols finally put it all together and return to the top of the SEC.