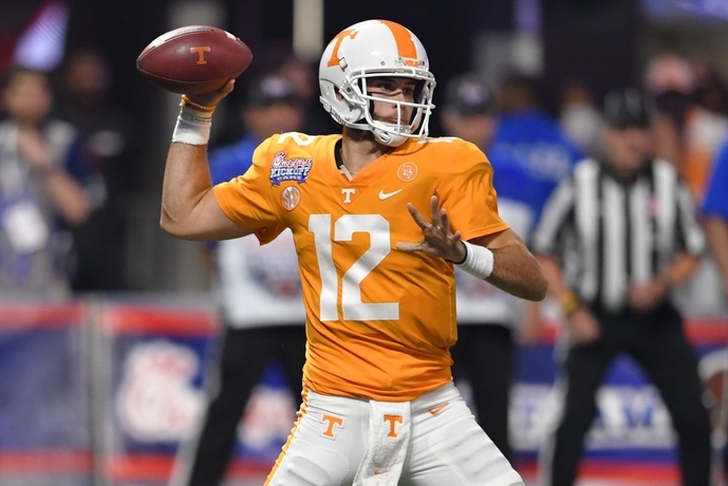 The Tennessee Volunteers are making a change at quarterback and it could result in a transfer of the former starter. Quinten Dormady has been benched in favor of Jarrett Guarantano and Dormady is now considering transferring.

247Sports reports that Dormady is "considering his future with the program" after being benched. Dormady won the starting job to replace departed QB Joshua Dobbs this offseason. In five games this year, the junior has completed 55.5 percent of his passes for 925 yards and six TDs, but has also thrown six interceptions and struggled with turnovers.

Dormady was a four-star recruit out of Texas and a top 265 player in the class of 2015. If he does elect to transfer, he'll draw interest.

Guarantano was also a four-star recruit, but the No. 81 overall player in the class of 2016. The redshirt freshman has played sparingly this year, completing 12 of 24 passes this season for 54 yards, one TD and no picks.

The decision to make a switch comes following a bye and a 41-0 loss at the hands of the Georgia Bulldogs. Dormady hasn't really been the problem, but head coach Butch Jones could hope for something similar to what USC did last year, when the Trojans benched Max Browne for Sam Darnold and saved their season.

Check out our Tennessee Volunteers team page for all the latest Tennessee Football Rumors or download the Chat Sports App!