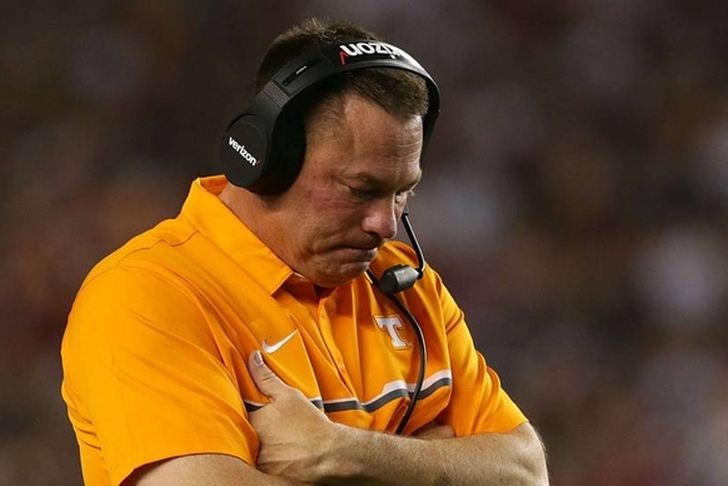 It was almost certain that Butch Jones was going to lose his job and after Tennessee lost 50 - 17 to Missouri and now it's official that Butch Jones has been fired. On Sunday Morning he notified his team that he will no longer be coaching at Tennessee. Until Tennessee finds a new head coach, Brady Hoke will take over as interim coach for the rest of the season. With Tennessee looking for a new coach the five most popular names to become the next Vols head coach are below.

Tennessee's Interm Head Coach Is?
The Vols will need an interim head coach and Brady Hoke is the next man up. Hoke was serving as the defensive line coach at Tennessee and was the head coach at Michigan before Jim Harbaugh. He also coached at Ball State and San Diego.

BREAKING: Butch Jones has been relieved of his duties as Tennessee head coach. Brady Hoke will serve as interim head coach. pic.twitter.com/qepG0PoSA2

What Does Tennessee Owe Butch Jones?
Jones signed a four-year contract after not being able to make it out of year one. This means the Vols owe him $8.23 million according to ESPN reporter Darren Rovell

Gary Patterson Coaching Rumors
According to 24/7 Sports Gary Patterson is a candidate for the Tennessee head coaching job. He has been one of the most successful coaches over the past few years in all of college football at TCU. He is TCU's all-time winningest coach at and there is a statue of him on campus, so obviously he has made a positive mark at TCU. For all his success he has never managed a team who made the College Football Playoffs. TCU has signed only one top 25 class since 2010. Will he be able to recruit well enough to compete in the SEC?

Patterson was asked a few days ago about the possibility of being asked to be Tennessee's next coach and this was his response.

A name that has been swirling around for the new head coaching job at Tennessee is Jon Gruden according to Mike Griffith at SEC Country. He started his career as a grad assistant for the Vols, was wooed by Tennessee after their head coaching job opened up following the 2012 season, and it seems like he has a tinge of regret over not accepting the position. In an interview with the NFL Network back in August of 2015, Gruden called coaching the Vols his "dream job,". Gruden will be the first coach that Tennessee calls when they start their interview process.