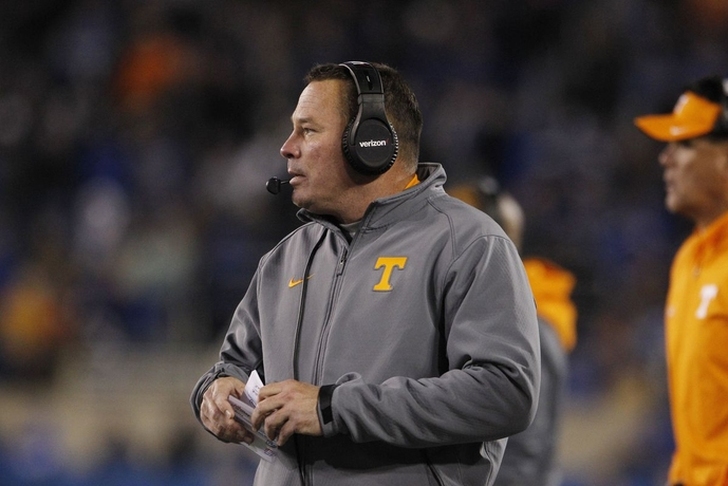 The Tennesee Volunteers are now 0-5 in the SEC this year following a loss to Kentucky on Saturday, continuing to fuel speculation about head coach Butch Jones' future with the program. Florida's Jim McElwain was already the first coach fired in the conference, and many think that Jones isn't far behind. Here are all the latest rumors surrounding Butch Jones' future that you need to know:

Butch Jones addresses his job status
For those hoping the Jones will be fired before the end of the season, that doesn't appear to be happening. Jones updated his job status on Monday following a meeting with athletics director John Currie to discuss Jones' immediate future at Tennessee.

“Nothing has changed at all,” Jones said of the meeting. “For our players, It’s back to work for another week. They’re ready to go just like our coaching staff. It’s a week to week season. It’s all about Southern Miss. It’s about getting ready to play in Neyland Stadium for homecoming.”

“We’re disappointed, but not discouraged,” Jones said about Tennessee's 3-5 record. “I understand the expectations of Tennessee football and so do our players. It’s been one of those years.”

“If I was a fan, I’d be upset too. I bleed with them. I also understand we need to win football games and I’m going to do everything in my power to get that done,” Jones said.

Jones is coming off back-to-back 9-4 seasons with the Vols and is 33-26 in his five years in Knoxville. However, Tennessee has never finished about 5-3 in the SEC under Jones.

Buyout already settled?
However, Currie's assertion that Jones will keep his job for the immediate future does not mean that he'll be in Knoxville very long. According to Trey Wallace of TheReadOptional.com, the two sides have already negotiated a buyout and Jones' agent is gauging interest from other schools.

Source: Jimmy Sexton has been pursuing a landing spot for Butch Jones & floating his name for the past 4 weeks, Buyout is settled. #Vols

The buyout in Jones' contract is reportedly more than $6 million.

Did Jones play a player with a concussion on Saturday?
However, one thing that could end Jones' tenure with the Vols right now is an internal investigation into whether Tennessee knowingly played offensive lineman Brett Kendrick in the second half of last weekend's game against Kentucky despite him suffering a concussion in the first half, according to TheReadOptional.com.

Communications received by The Read Optional show that Tennessee’s staff knowingly played a player with a concussion. Brett Kendrick, the team’s starting right tackle, played at least two quarters of Saturday’s loss against Kentucky with a concussion, per a source with knowledge of the situation.

“He is resting in a dark room. He doesn’t remember anything about the second half of the game”. A text received by The Read Optional reads. “They left him in until the last 22 seconds and only pulled him out because he finally threw up on the sideline.”

If the investigation finds that Jones knowingly played Kendrick with a concussion, he will be fired immediately. Here's what Jones said on the matter at today's press conference.

Jones also said that the team's medical staff has “full authority on removing players” and that he has "absolutely no say in these decisions."