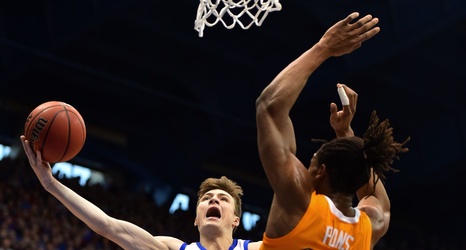 Despite keeping things close, Tennessee basketball could not pull off a major upset at the Kansas Jayhawks on Saturday. The Vols cut it to three within five minutes after trailing by 13 early in the second half, but they fell in the end 74-68 with Peyton Manning and Phillip Fulmer in attendance.

After a scoreless first three minutes, UT jumped out to an seven-point lead early in the first half. But Kansas rallied and took a 37-30 lead into halftime, building on that in the second half before the Vols fought back.

With the win, Kansas improves to 16-3 overall.