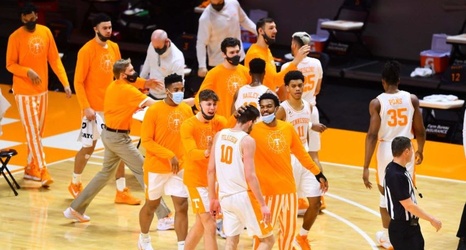 Tennessee players react on the court during a timeout during a basketball game between the Tennessee Volunteers and the South Carolina Gamecocks at Thompson-Boling Arena in Knoxville, Tenn., on Wednesday, February 17, 2021. Kns Vols Gamecocks Hoops Bp

On Wednesday against the South Carolina Gamecocks, Tennessee basketball didn’t have starting guard Josiah-Jordan James, the glue guy of the backcourt who was once a five-star. Keon Johnson, a five-star freshman and another starting guard, got into foul trouble and had five turnovers.

In spite of those issues, the Vols won 93-73 in dominating fashion. This came a week after they beat the Georgia Bulldogs 89-81 without Yves Pons, one of their two starting senior forwards and the reigning SEC Defensive Player of the Year.