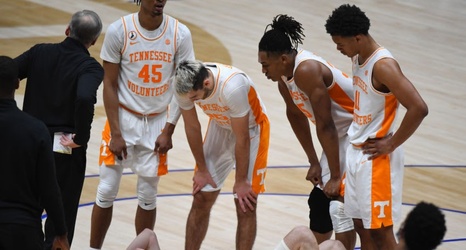 Mar 12, 2021; Nashville, TN, USA; Tennessee Volunteers players check on Tennessee Volunteers forward John Fulkerson (10) after he was hit in the head by Florida Gators forward Omar Payne (not pictured) on a play during the second half at Bridgestone Arena. Mandatory Credit: Christopher Hanewinckel-USA TODAY Sports

Remember last summer, when everybody learned Tennessee basketball was set to return its All-SEC leading scorer and its the SEC Defensive Player of the Year while adding two five-stars? Of course expectations were set to be through the roof.

What if you were told then, though, that the leading scorer would be knocked out of the NCAA Tournament due to injury, Rick Barnes would have no real time to develop the freshmen and the defensive player of the year and one of the five-stars would miss time due to injuries themselves?