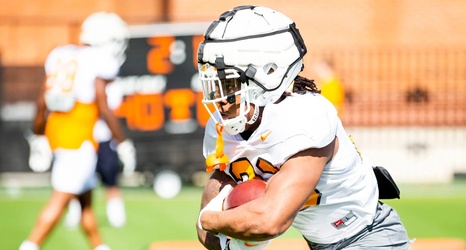 Pretty much every position on the Tennessee offense is up for grabs this spring, as Josh Heupel and his staff figure out what they’ve got on this roster. A length list of transfers has opened things all the way up, even for a few freshmen that typically might not see chances at playing time this early on.

One of those newcomers that has generated a little bit of buzz has been freshman tailback Jaylen Wright, who committed to Tennessee as a three-star prospect. What makes Wright intriguing is his different style, which offers speed and agility — something Tennessee quite frankly doesn’t have much of after Eric Gray and Ty Chandler exited the program.