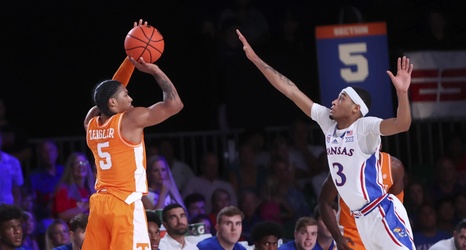 Santiago Vescovi and Zakai Ziegler combined for 34 points and eight 3-pointers, while Tennessee's defense held Kansas to 32 percent shooting in a 64-50 win in the Battle 4 Atlantis Championship game.

Tennessee’s defense started out engaged, holding Kansas to a 1-8 start from the field, and the Vols held a 10-2 lead despite the offense turning it over four times in the first five minutes.

Unfortunately, the Vols offense didn’t take much advantage of Kansas’s cold shooting early. Julian Phillips missed two good looks from beyond the arc and an easy one at the hoop, while the offense continued to play loose with the ball.