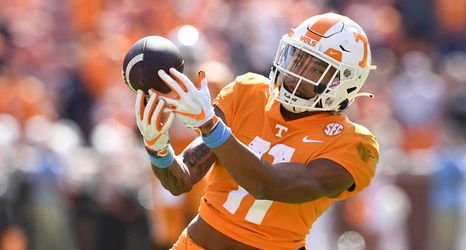 Not only did Jalin Hyatt emerge as a big-play threat during the 2022 season, he became one of the best players in all of college football. He achieved legend status against Alabama, scoring a whopping five times as the Crimson Tide couldn’t come up with any answers defensively.

This monster year he’s putting the finishing touches on certainly has caught the eye of the NFL, too. In a recent mock draft on CBS Sports, Hyatt came off the board in the middle of the first round. 16th overall to the Packers, to be specific.

Hyatt wasn’t in the first-round conversation heading into the season, but he’s a great example of a player taking advantage of his opportunities, thanks in large part to Hendon Hooker’s Heisman Trophy campaign.