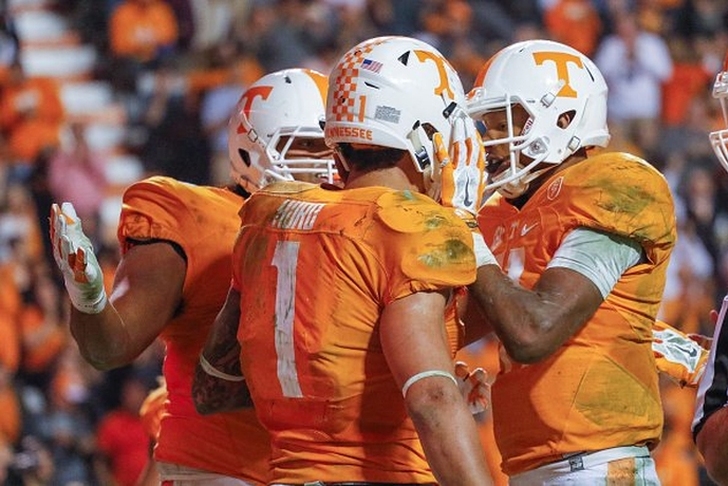 Appalachian State nearly did it again. This time, the Mountaineers went into Neyland Stadium and forced overtime against the No. 9 Tennessee Volunteers. However, the Vols held on and avoided disaster to pull off a 20-13 comeback win. The Vols were down 13-3 at the half.

In OT, the Vols marched down on their first possession and scored. It was a crazy play, with Joshua Dobbs fumbling at the goal line and Jalen Hurd recovering it in the end zone. The video of the play is below.

The Mountaineers failed to pick up a 4th and 6 on their OT possession, ending the game. App State had a chance to win it at the end of regulation, with the ball at the Tennessee 33 with 35 seconds left. However, they weren't able to get in field goal range and ran out of time, forcing overtime.

Marcus Cox was great for Appalachian State. He had 24 carries for 115 yards and a TD on the ground, plus 4 catches for 34 yards and a TD in the passing game. Taylor Lamb had just 108 yards through the air with a pick and a TD. However, he had a touchdown and 27 yards on the ground.

Vols QB Joshua Dobbs was 16 of 29 for 192 yards and 1 TD. Normally a dual-threat, Dobbs had nothing going on the ground until overtime. Jalen Hurd had 28 carries, but only 110 yards and the game-winning TD. The Vols' offensive line had issues all night.

App State started the scoring after a muffed Vols punt, with QB Taylor Lamb scoring on a 5-yard TD run. The Vols added a field goal in first quarter as well, but that was it for the scoring. Marcus Cox extended the lead to 13-3 on a 33-yard TD catch. Cox did most of the damage, breaking tackles to score. However, a missed extra point and a missed field goal proved costly.

The Vols tacked on a field goal in the third quarter and finally tied it on a 67-yard TD catch by Josh Malone. In overtime, Hurd recovered Dobbs' fumble. That ended up being game-winning score.