Game-By-Game Prediction Of Tennessee’s Record In 2016 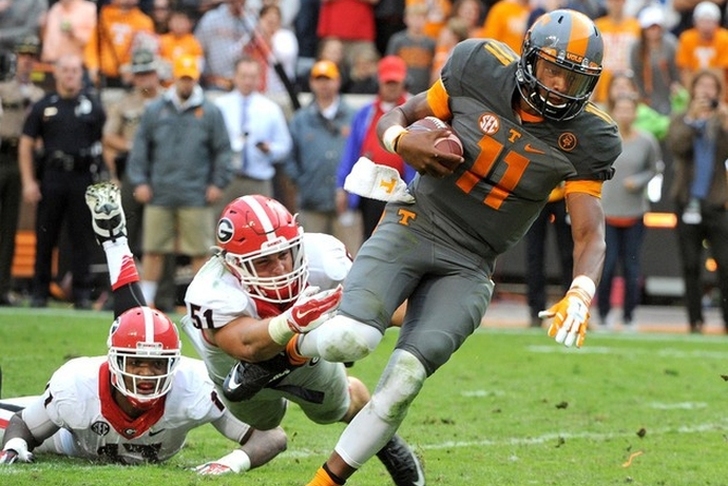 The Tennessee Volunteers were popular pick to win the SEC East last season, but came up just short. The Vols went 9-4, but those four losses coming by a combined 17 points. The Vols' expectations are just as high as we approach the start of the 2016 season, and they're more than capable of reaching - and surpassing - their goals. Here's a game-by-game breakout of how we see their season playing out in 2016:

App State will essentially serve as a preseason game for the Vols. This is one Tennessee will win easily.

Even though Virginia Tech isn't expected to be very good, there's a lot of buzz surrounding this game because of it being played at Bristol Motor Speedway. The Vols will prove their superiority fairly early on in this one.

This game would be very exciting if it was Ohio State. Ohio? Blowout win for the Vols.

The Gators got a narrow 28-27 win at home last year helped them capture the SEC East, but the Vols are at home in this one and with fewer question marks than Florida. It's another close game, but the final score is in Tennessee's favor this time.

Georgia has major quarterback questions, and we don't know how they'll look under first year head coach Kirby Smart. Still, this game should be a toss up, but I give the edge to Tennessee because of their experience.

This is the perfect trap game for Tennessee. Second straight road game, playing a team they haven't faced since 2005, with a big home game against Alabama on deck. I see the Aggies upsetting the Vols here.

This could be an SEC title game preview. Playing at home will be a massive boost for the Vols. At least one coach thinks Tennessee is better, since the Vols got one No. 1 vote in the coaches poll. The Vols need a trademark win in the Butch Jones era, and I think this will be it.

South Carolina should be better in their first year under head coach Will Muschamp, but they are very young and inexperienced. Advantage: Tennessee.

This one doesn't need an explanation.

Kentucky has gradually gotten better over the last few years, but they still lack playmakers and a reliable defense. Tennessee should win this fairly easily.

Missouri's defense is supposed to be good, but their offense is dreadful. The Vols will simply be able to outscore Mizzou on their way to a win.

Some people see a bowl berth for Vandy this year - I am not one of those people. Tennessee is clearly the better team and they will prove it on the field, securing a SEC Championship Game berth in the process.

Follow our Tennessee Volunteers news page for all the latest Vols football news!