The 5 Toughest Games On Tennessee's Schedule In 2016 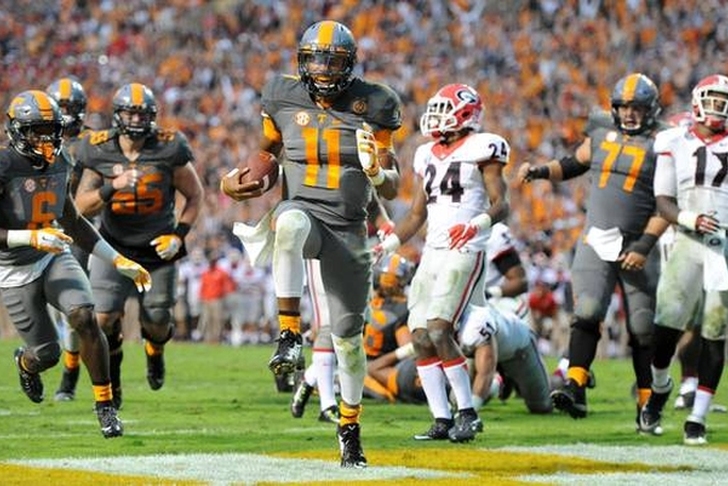 College football's unique in that a single loss could mean the difference between a conference championship (or the ultimate regular-season goal, a College Football Playoff spot) and becoming an also-ran in the FBS ranks. If the Tennessee Volunteers want to reach their goal of competing for a College Football Playoff berth in 2016, they can afford a maximum of one loss. Here are the Vols' five toughest games heading into this year:

5. Virginia Tech Hokies (September 10th)
Tennessee is clearly the more talented team on paper, but this game has been hyped for two years since it was announced they were playing at Bristol Motor Speedway. This game will be about keeping emotions in check and playing to their potential.

4. at Texas A&M Aggies (October 8th)
Kyle Field is one of the toughest places to play in the entire country, and it will be one of Tennessee's biggest road tests of the season.

3. Florida Gators (September 24th)
If you want to win the SEC East, as the Vols expect to do, they have to beat the defending division champs. All bets are off in this rivalry showdown.

2. at Georgia Bulldogs (October 1st)
Speaking of critical SEC East matchups, most experts are picking either Georgia or Tennessee to win it. Whoever comes out on top in this game should win the division.

1. Alabama Crimson Tide (October 15th)
Tennessee was two minutes away from upsetting the eventual national champions on the road last season. Now, the Tide have to come to Knoxville - and the Vols will be ready.