4 Things We Know About Tennessee Football After 4 Games 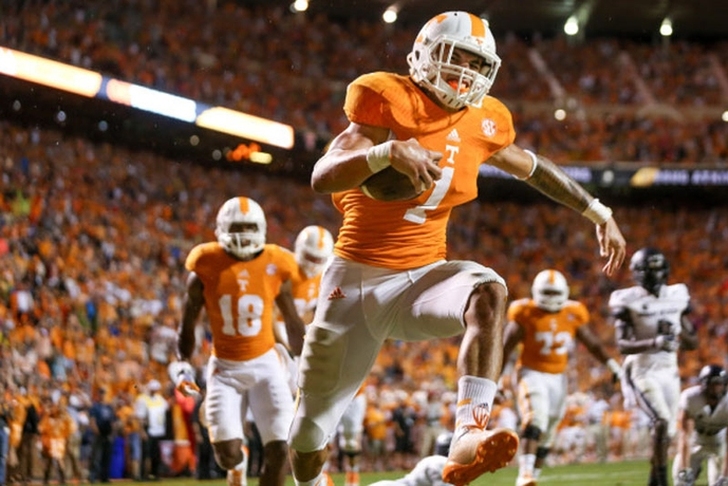 The Tennessee Volunteers suffered a heartbreaking 28-27 road loss to the Florida Gators to start SEC play this past Saturday, and while this one will sting, we've seen enought resiliency from this Vols team over the past month to know they won't be down for long. Here's 4 Things We Know About Tennessee Football After 4 Games.

1. Jalen Hurd Is FOR REAL

Hurd rushed for 899 yards and 5 touchdowns last season on 4.7 yards per carry, showing flashes of a Heisman-level talent during his freshman campaign. Those flashes have become full-on lightning storms so far in 2015. Hurd already has 402 yards and seven scores in 2015, putting him on pace for an unreal 1206-yard, 21-touchdown season (bowl game not included). He may not get the national respect that an Ezekiel Elliott or Derrick Henry gets, but he's just as good (if not better).

2. The Vols Are In Search Of A "Killer Instinct"

Tennessee is two bad 4th quarters short of a 4-0 record. That's not easy to swallow with all of the expectations heaped on this squad before this season, but it's at least a sign that there is enough talent in tow to put the Vols in position to win more often than not. However, like Oklahoma's furious comeback in Week 2, Florida's rise from the dead this week shows that there's still plenty to be learned when it comes to stretching the team's opening aggression across all 60 minutes (plus overtime) of a game.

3. Josh Dobbs Is The Right Guy To Lead This Offense

Dobbs literally did it all in The Swamp on Saturday, throwing the ball 17 times, rushing the ball 18 times for 136 yards AND catching a 58-yard TD pass from Jauan Jennings. He may not be a conventional dropback passer, but he's the perfect, multifaceted athletic talent to push this dynamic Tennessee offense forward. Plug even a top-tier traditional pocket signal caller like Cal's Jared Goff and UT's offense would lack the three-dimensional depth that Dobbs provides -- regardless of the fact that his aerial work is currently being used as a decoy for the running game.

4. Butch Jones Has The Vols Believing

Jones' third year in Knoxville brings with it an added sense of purpose since the majority of players working under Butch were recruited by him and have gone to bat with him through thick and thin during his first two years-plus on the job. Watching this Tennessee team gives one the sense of a program on the rise, wins and losses taken out of the equation. There's an extra zip at the end of plays -- extra energy bursts that don't fully translate on television -- which bears the mark of an SEC power in waiting. There have been growing pains a-plenty this year, but Jones has already planted the seeds for a future dynasty.