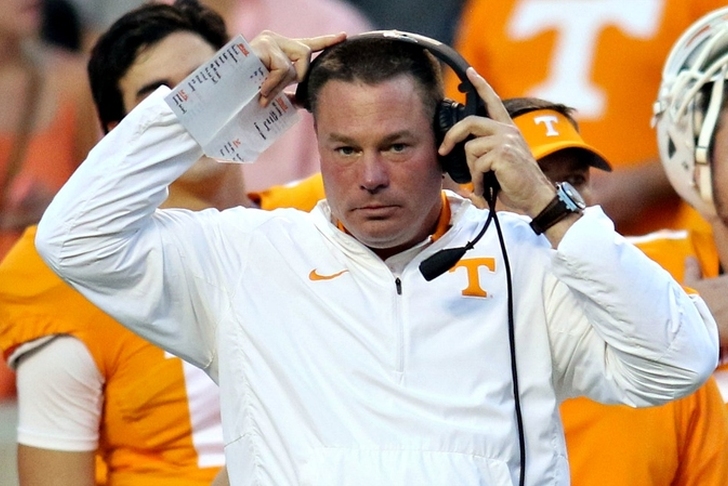 The Tennessee Volunteers stumbled to an 8-4 season after a 5-0 start, with embarrassing losses coming to South Carolina and Vanderbilt at the end of the season. Many are left wondering what went wrong this year for a Vols team that had College Football playoff aspirations, and it turns out to be a very large internal issue. Travis Haney of 247sports detailed the disastrous culture of the program under head coach Butch Jones, which revealed some pretty alarming things about the program. Here are the four most troubling things from the report:

4) Butch Jones isn't sure of himself
Teams look to their head to be their leader, but according to Haney, Jones is the one in need of some leading. Many believe he struggled to prepare the Vols several times this season - especially their loss to Vanderbilt - which Haney writes may come from a sense that he doesn't belong:

Those close to Jones paint the picture of a good man with good intentions — but one who struggles with insecurity.

“He’s great in a small setting, but he’s just not a comfortable guy.”

Jones won at Central Michigan and Cincinnati, but Tennessee is his first Power 5-level job.

Jones is also known for bickering with the media and reporters from time to time, which a source said is a big indicator that Jones is "unsure of himself."

3) Administrators and players don't believe Jones can win a championship
As you can imagine, a coach that doesn't have confidence in himself has a hard time instilling confidence and faith in those around him. That is definitely the case with Jones, and many around the program (including a group of players) don't believe that Jones can lead them to any kind of championship:

In the past few weeks, 247Sports has talked to dozens of former and current coaches, players and administrators at Tennessee. We have worked to take the temperature of a place again trending down on the national and SEC landscapes.

He’s rightly credited for cleaning up the personnel mess Derek Dooley created and left behind. He is generally liked on a personal level within the building, with one administrator calling him a “fundamentally good person.” But the sense is that the 48-year-old, fourth-year coach is not capable of leading Tennessee to be a champion of anything substantive on a football field.

“I think the clock has started and we’re facing change again,” one Tennessee source told 247Sports.

Jones has been ridiculed for saying that Tennessee's senior class has won the “championship of life” after their loss to Vandy, which created a large disconnect between him and fans.

2) Players essentially run the program
Jones also apparently doesn't have control of the program. That belongs to the players, who had at least some influence in Jones' decision to fire strength coach Dave Lawson and were essentially allowed to do whatever they wanted. He also continues to cater to the needs of and pamper his higher-rated recruits:

A central theme, represented there, is a culture that allotted players — especially veteran players who were pieces of those top-rated recruiting classes — too much control.

“It was appeasing them rather than toughening them up,” one UT staffer said.

Multiple people close to the program thought it went back to promises made during the recruiting process, an enablement of players who were already entitled due to high school hype. There was no de-recruitment, in other words.

“Certain guys had more of a voice than they deserve,” a source close to the team said. “Certain guys would become team captains even though they didn’t earn it. When that happens, it dissolves trust the rest of the team has in you.”

1) This all created a culture that is a "disaster"
All of those things have added up to what Haney says some in the football building call a culture of "disaster." There were signs that something was off during the season when wide receiver Preston Williams and star running back Jalen Hurd decided to transfer in the middle of the season, and Haney detailed much more discourse going on behind the scenes.

Injuries riddled the team, particularly on the defensive side, but sources told us that philosophical squabbles between defensive assistants also undermined performance.

Multiple players were suspended or dismissed for drug-related issues, a source said — though that isn’t uncommon in major programs. (And the Vols did avoid arrests, one UT official pointed out.)

Sensing the vibe put off by the veterans, sources indicated that some freshmen, including ones getting reps, were lackadaisical in their effort to learn. A coach said one freshman, who played a lot of snaps, was unable to recognize basic scheme principles because of a lack of work ethic.

Jones was likely facing a make-or-break season in 2017 anyways after underachieving on the field, but this report indicates that many changes need to be made within the program. Some assistant coaches are not expected to return and "many of the players who were 'coddled' are not returning," but it needs to result in on-field success to help Jones' job security.