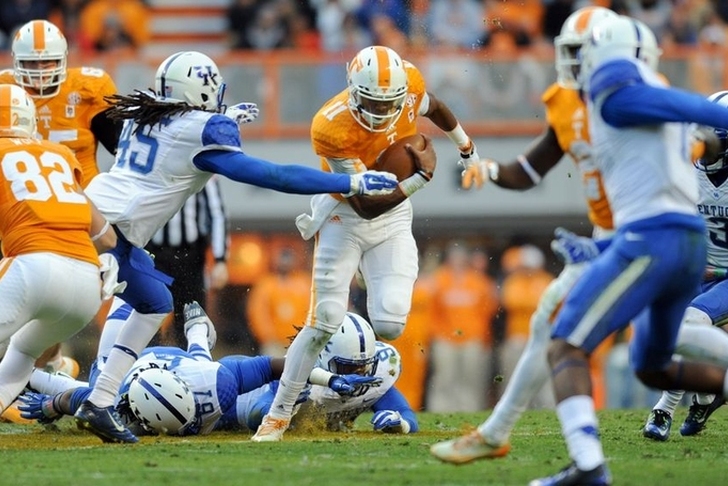 The Tennessee Volunteers have suffered several heartbreaking losses this season, losing four games by less than a touchdown. At 3-4, the Volunteers have a great chance to pick up a win against the 4-3 Kentucky Wildcats. Kentucky has yet to beat a team with a winning record this season. Tennessee is favored by 8.5 points on the road, and Vegas has the right mindset. Here are three reasons why Tennessee is GUARANTEED to beat Kentucky.

Both teams have forced turnovers at a similar rate, with Kentucky forcing eight and Tennessee nine. However, the Wildcats are a much more turnover-prone team. The Wildcats have coughed up the ball 11 times, including 10 interceptions. Nine of those have come from starting QB Patrick Towles, who has only eight TD passes. The Vols have committed six turnovers, including only two picks from QB Joshua Dobbs. The Vols have the defense (see below) to force a turnover or a two, while the offense should continue to avoid the mistakes. When that happens, the Vols will leave Lexington with a win.

The Vols have allowed just 30 points once this season, against Georgia. It makes sense that the advanced stats love Tennessee. Even in a conference loaded with defensive talent, the Vols have one of the better units. Tennessee has a distinct advantage against a Kentucky offense that has yet to score 30 points against a Power 5 team. The defense will shut down the Kentucky offense, making life easy on the Vols' offense. Behind a strong defensive performance, there's no way the Vols lose to Kentucky.

The Vols have a true three-headed attack on the ground. RB Jalen Hurd leads the team with 664 yards on 144 carries. His backup, Alvin Kamara, has racked up 276 yards on 50 carries. Dobbs is the second-leading rusher, with 387 yards on 89 attempts. Those three are averaging nearly 4.4 yards per carry and have 16 touchdowns. No one has truly been able to stop the Vols' ground attack, as Tennessee has rushed for 150 yards in every game this season. Against a defense that has allowed 172 yards per game, the Vols will run all over UK en route to a win.