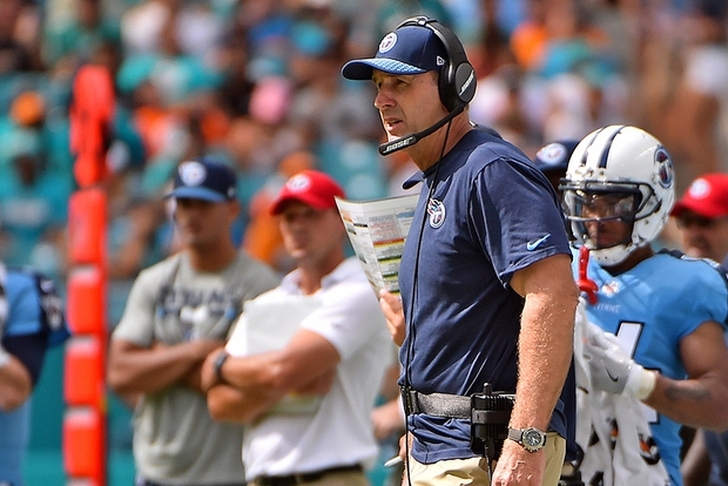 The Tennessee Titans are looking for a new head coach. The Titans have announced they've parted ways with Mike Mularkey, a surprising move. The Titans reportedly offered Mularkey an extension over the weekend, but when Mularkey didn't want to get a new offensive coordinator, the Titans changed course and dumped him.

The Titans are now playing catchup, as other NFL teams have already completed multiple interviews. Heck, the Bears have already officially hired their head coach. With that in mind, here are the top 10 coaching possible coaching replacements for the Titans.

10. Marquand Manuel, Falcons defensive coordinator
Looking for a younger, less-known name? Marquand Manuel might be the defensive version of Sean McVay. He's just 38 years old and has already ascended to the DC role in Atlanta. He played in the NFL from 2002-09, with multiple stops in the NFL. He started coaching in 2012 with the Seahawks and has seen a very rapid rise to the DC role. He could get an interview if only to fulfill the Rooney Rule. Still, he's a name to watch going forward.

9. Dave Toub, Chiefs Special teams coach
Toub is one of the greatest special teams coaches in the history of the NFL. He has turned the Chiefs special teams into one of the most feared units, as he has at all of his previous stops. He is respected throughout the NFL and has a great relationship with the players and front office. At 55 years old, Toub is older than many first-time head coaches but will draw interest after having interviews last season. He hasn't had as much interest as last year, but perhaps that changes with the Titans' job now open.

8. Jim Bob Cooter, Lions Offensive Coordinator
Cooter came to the Lions in 2014 as the teams' quarterbacks coach before he was promoted in Week 8 of the 2015 NFL season. Before that, he coached as an offensive assistant with the Denver Broncos and helped guide the Broncos offense to a 2013 Super Bowl appearance. Cooter is in his ninth NFL season and he could be the new face the Titans need calling the shots.

7. Jim Schwartz, Eagles defensive coordinator
Schwartz is 51 years old with a head coaching career record of 29-51. He spent his five head coaching seasons with the Detroit Lions and even though his record isn't great, he took a 0-16 Lions team and turned them into a 10-6 playoff team in just three seasons. While Schwartz's time didn't end that well, he has rehabbed his stock with the Eagles. The Philadelphia defense has been very impressive and it's been enough for Schwartz to garner interest, including an interview with the Cardinals. The Titans could also have interest after making the late move to fire Mularkey. He also is a former Titans DC and still has strong ties to the city of Nashville.

6. Steve Wilks, Panthers defensive coordinator
Wilks has been connected to the Giants job because of his familiarity with potential GM Dave Gettleman. A 48-year-old defensive coordinator, Wilks is in his first year in the role. He's a lesser option for the Titans, but he does make some sense if they want to hire a defensive-minded coach. He would also fill the Rooney Rule requirement. He had numerous interviews this offseason.

5. John DeFilippo, Eagles QBs coach
We'll get to another Eagles coach later, but John DeFilippo will generate some head coaching buzz this offseason. It might be one year too early for DeFilippo to get a head coach gig, but I said the same thing about Sean McVay last year. DeFilippo has OC experience, although it came with the Browns. But he gets some credit for the play of Carson Wentz and in what is a down class of offensive-minded coaching options, keep an eye on DeFilippo and even Rams OC Matt LaFleur.

4. Frank Reich, Eagles offensive coordinator
Reich is one of the hottest names in the NFL right now given the success of the Eagles this season. Carson Wentz, in his second year, emerged as one of the best young quarterbacks in the league before his injury. Reich would likely help Marcus Mariota continue his development. The Eagles' creative offense is a major reason why they have had success this season and the Titans could be looking for a fresh start. Reich will be connected to multiple jobs this offseason. If the Titans miss out on their top candidate, the field becomes muddled and Reich could be a strong option.

3. Mike Vrabel, Texans defensive coordinator
Vrabel appears to be a prime candidate for the Colts job, if they miss out on Josh McDaniels (more on him later). Vrabel has drawn buzz as a potential head coach and that now includes an interview for the Titans job. Vrabel is well-regarded in NFL circles, even though the Texans' defense was not good this year. It might be a year too early, but Vrabel does have ties to Titans GM Jon Robinson.

2. Pat Shurmur, Vikings offensive coordinator
The Vikings have been one of the surprise teams this season with a 12-3 record and in position to secure a playoff bye. The offense lost Teddy Bridgewater last season due to a horrific leg injury and Sam Bradford this season, but the coaching of Shurmur has reignited Case Keenum's career. Not many offensive coordinators would be able to lose two quarterbacks and still be successful, but Shurmur has found a way. Shurmur was the head coach of the Browns from 2011 to 2012 where things did not go well, but he has rehabbed his image in stints with Philadelphia and Minnesota. However, Shurmur is heavily connected to open jobs with the Cardinals and Giants. He appears likely to take a job with the Giants, which would eliminate him.

1. Josh McDaniels, Patriots offensive coordinator
McDaniels has rebuilt his reputation while leading the Patriots’ offense for the past five seasons after a less-than-successful head coaching debut in Denver. Its been rumored for several years that McDaniels has a strong desire to be an NFL head coach again should the right role open up. McDaniels has ties to GM Jon Robinson, with both of them spending some together in New England. Don't be surprised if the two Patriots coordinators are at the top of Robinson's list. McDaniels should have been hired when the Titans originally hired Mularkey years ago. He appears likely to take a job with the Colts, which would eliminate him.

Check out our Tennessee Titans team page for all the latest Titans Rumors or download the Chat Sports App!