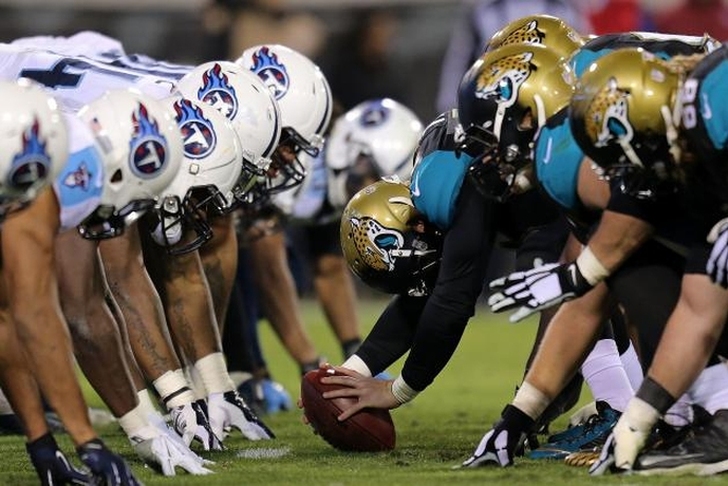 The 2-7 Tennessee Titans hit the road to face the 3-6 Jacksonville Jaguars in an AFC South battle on Thursday Night Football. It's not the most-hyped Thursday Night matchup this season, but it does have serious division implications. So will the Titans or Jaguars come out with a win? Here's our preview and prediction.

Local TV: CBS, but only in the Titans' and Jaguars' primary markets. Check your local listings.

Neither the Jaguars nor Titans come to mind as playoff contenders, but they still have a chance. The AFC South is having a down season, and the Jags are only one game out first place. The Titans are two games back, although this isn't a season in which they were expected to make a serious playoff push. So while this doesn't appear to be a "must-watch" Thursday night game on the surface, there are playoff implications.

What They're Saying About The Tennessee Titans:

David Cobb Needs To Get Carries

The Game Plan For Tennessee

What They're Saying About The Jacksonville Jaguars:

Yeldon Questionable, But Should Play

Quarterback play. Blake Bortles and Marcus Mariota are both young and developing QBs. Both have had limited support from their running games, so there has been a bit of baptism by fire. Both teams surely feel this is a winnable game, but only if their QBs play well. Bortles has shown flashes of big-play ability, but still struggles at times with accuracy and turnovers. Mariota is actually one of the best road QBs in the NFL. It's a limited sample size, but Mariota is completing 68 percent of his passes with 10 TDs and zero picks in road games. Still, Mariota is just a rookie and makes his fair share of mistakes.

Mariota continues his strong road play, leading the Titans to a win. The Titans have success pressuring Bortles, which leads to mistakes by the young QB. Bortles tries to rally his team, but comes up just short. With the win, the Titans jump back in the AFC South race.