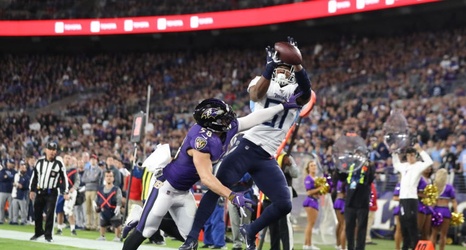 BALTIMORE, MARYLAND - JANUARY 11: L.J. Fort #58 of the Baltimore Ravens defends a pass intended for Jonnu Smith #81 of the Tennessee Titans during the second half in the AFC Divisional Playoff game at M&T Bank Stadium on January 11, 2020 in Baltimore, Maryland. (Photo by Rob Carr/Getty Images)

It is rare that a tight end is one of the most important players in a conference, but Tennessee Titans rising star Jonnu Smith can make that case.

First of all, we need to address the fact that there are really only three teams in the AFC South race at this point.