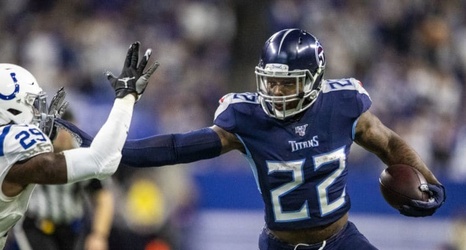 INDIANAPOLIS, IN - DECEMBER 01: Derrick Henry #22 of the Tennessee Titans runs for a touchdown in the third quarter of the game against the Indianapolis Colts at Lucas Oil Stadium on December 1, 2019 in Indianapolis, Indiana. (Photo by Bobby Ellis/Getty Images)

Derrick Henry has been an incredible running back for the Tennessee Titans since December 2018, and he has been the motor for that offense.

However, when he was set to hit free agency this offseason, there was some hesitation from the fan base on what exactly the team should do with a 26-year-old running back who had some injuries down the stretch.