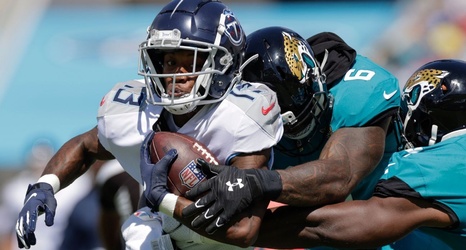 JACKSONVILLE, Fla. -- Replacing Arthur Smith as the new Tennessee Titans offensive coordinator was a daunting task for Todd Downing. The Titans were among the NFL's top-scoring offenses last season, averaging 30.8 points per game.

"Todd's a stud," offensive lineman Taylor Lewan said after the Titans' 37-19 win over the Jacksonville Jaguars (0-5). "People want to compare him and Arthur all of the time. I think the easiest comparison is the guys don't have egos. When Arthur first got in, we started 2-4, and he just kept working, never wavered or seemed like he was panicking.