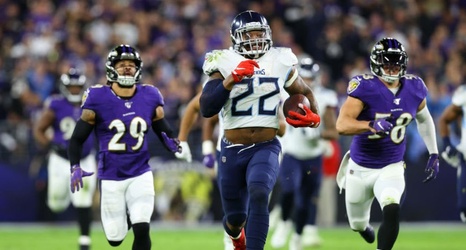 BALTIMORE, MARYLAND - JANUARY 11: Running back Derrick Henry #22 of the Tennessee Titans carries the ball against the Baltimore Ravens during the AFC Divisional Playoff game at M&T Bank Stadium on January 11, 2020 in Baltimore, Maryland. (Photo by Rob Carr/Getty Images)

But, that isn’t exactly what happened with the Titans and Ravens last season is it?