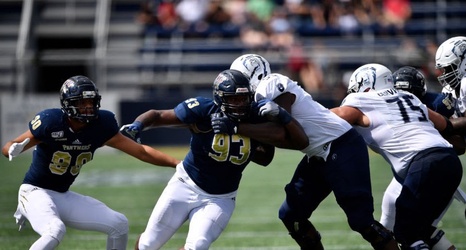 MIAMI, FLORIDA - NOVEMBER 02: Teair Tart #93 of the FIU Golden Panthers in action against the Old Dominion Monarchs in the first half at Ricardo Silva Stadium on November 02, 2019 in Miami, Florida. (Photo by Mark Brown/Getty Images)

A look at the Tennessee Titans “final” rookie additions.

The Tennessee Titans had a strong, but not perfect 2020 NFL Draft class where they picked up six new players.

However, the bulk of their rookies will come from UDFA which is true of nearly every team in the NFL. So, it is a little bit exciting to see who the Titans added in UDFA thanks to their official release today.