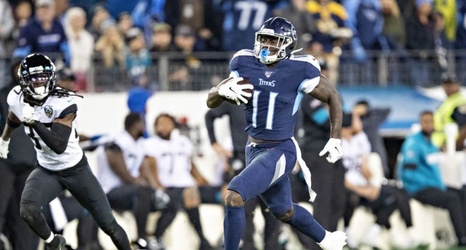 NASHVILLE, TN - NOVEMBER 24: A.J. Brown #11 of the Tennessee Titans runs for a touchdown during the second half of a game against the Jacksonville Jaguars at Nissan Stadium on November 24, 2019 in Nashville, Tennessee. The Titans defeated the Jaguars 42-20. (Photo by Wesley Hitt/Getty Images)

Tennessee Titans fans have been enamored with A.J. Brown since his first game where he posted 100 yards despite getting very little preseason practice.

The thing is, over the last decade or so Titans fans have a tendency to pump up average or above-average players because that is all that they have been able to get excited about.