Machine at Nissan Stadium catches fire on field before Colts vs. Titans 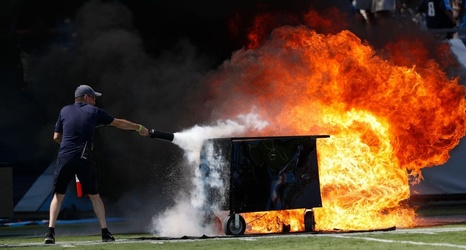 NASHVILLE, Tenn. -- The Tennessee Titans wanted to come out on fire before their clash with the division rival Colts on Sunday. It took a little more literal meaning just before player introductions at Nissan Stadium.

One of the pyrotechnics machines used during player introductions caught on fire. The fire occurred after the Titans welcomed former players back to the field to celebrate the retirement of the jerseys of Eddie George and Steve McNair.

A fire just erupted here on the field. The staff at Nissan Stadium handled it swiftly. pic.twitter.com/Rma8D8Q1fJ

Something caught fire at stadium before Titans-Colts in Nashville pic.