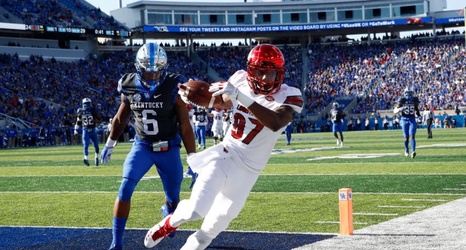 LEXINGTON, KY - NOVEMBER 25: Dez Fitzpatrick #87 of the Louisville Cardinals catches a touchdown pass against the Kentucky Wildcats during the game at Commonwealth Stadium on November 25, 2017 in Lexington, Kentucky. (Photo by Andy Lyons/Getty Images)

The Tennessee Titans selected Dez Fitzpatrick in the fourth round of the 2021 NFL Draft and many expected him to hear his name called much later in the draft. As a result, he was the Titans’ most surprising draft pick, per Ryan Wilson of CBS Sports who ranked every team’s draft class.

The pick of Fitzpatrick in the fourth round might be why Tennessee is No.