Darrynton Evans could be the next great Titans running back 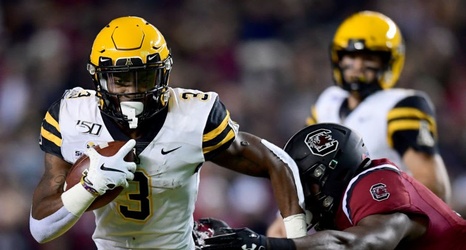 COLUMBIA, SOUTH CAROLINA - NOVEMBER 09: Darrynton Evans #3 of the Appalachian State Mountaineers runs with the ball in the first quarter during their game against the South Carolina Gamecocks at Williams-Brice Stadium on November 09, 2019 in Columbia, South Carolina. (Photo by Jacob Kupferman/Getty Images)

The Titans have their RB1 in Derrick Henry, but Darrynton Evans may be the future.

One of the best-kept secrets in the NFL, the one that you won’t see many people talking about outside of Nashville, is that the Tennessee Titans are professional football’s running back factory.

Sure, Derrick Henry has people talking by becoming the national landscapes football infatuation after the Titans’ playoff run — but the success Tennessee has had with their running backs dates back far beyond Henry’s brilliance, and reaches even higher peaks.